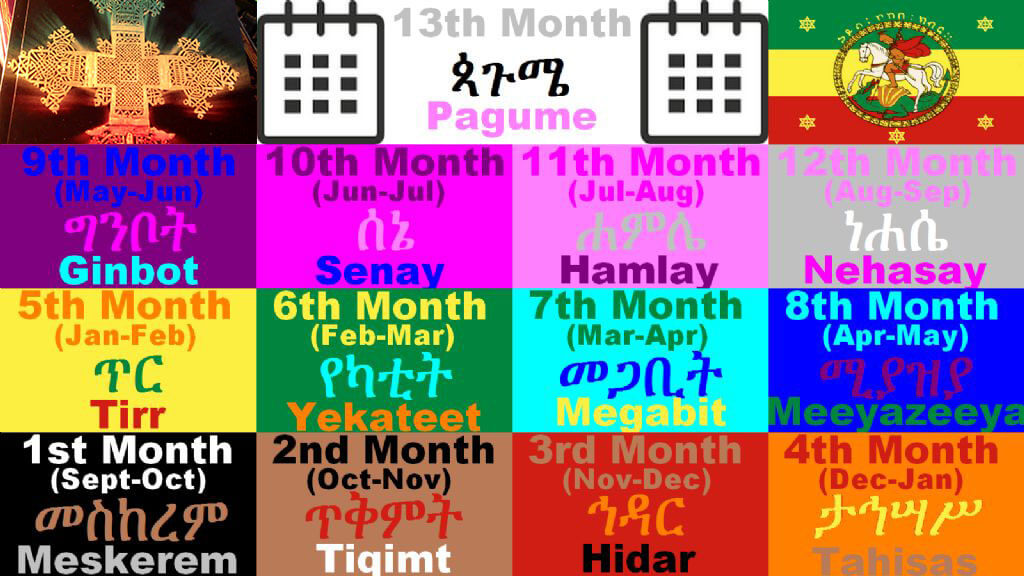 Note: The renowned Ethiopian born US scholar Prof. Ephraim Isaac, said that the Ethiopian calendar is unique in that it belongs neither to the Julian, nor to the Gregorian calendars. The professor was quoted saying this on the Ethiopian Herald some eight years ago.

Historical literature shows that the calendars of the entire world are based on the work of the old Egyptian astronomers who discovered, as early as 3000 BC to 4000 BC that the solar or sidereal year lasted slightly less than 365 ¼ days.

However, it was left to the astronomers of the Alexandrian school to incorporate this knowledge into some sort of calendar; and it was these astronomers who also came up with the idea of leap years.

Subsequently, the Romans under Julius Caesar borrowed their reformed calendar from the Alexandrian science and adopted it to the western world. Then the Copts inherited this science as a right and built upon it themselves. In due course, according to the literature, the Copts handed this calendar, together with their method of computing the date of Easter, on to their descendant Church in Ethiopia.

Therefore, the literature further said, the Ethiopian year has something in common with the western year, having been derived from the same source. Prof. Ephraim also said that many people mistakenly assume that Ethiopian calendar is Julian. “The Gregorian calendar is actually the revisions of Julian calendar, which Pop Gregory edited or decided according to certain calculations,” he said. 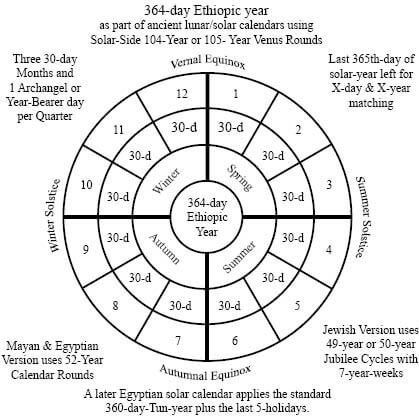 Months in both Julian and Gregorian have 30 and 31 days, and with February or June either 28 or 29 days during the leap year, he explained and said that the two do share similar character in terms of months and 365 days, which is 366 days in each leap year.

But, he said, months in the Ethiopian calendar which is based on Metsehafe-Hissab (Book of Calculation), the derivatives of the Alexandrian Jewish calendar, have equal 30 days, and then Pagumen, which is the 13th month of five days and six in each leap year, he said.

In addition to Metsehafe-Hissab, the professor said, there is a very famous book called, Metsehafe-Henok, (The Book of Enoch) which is found only in Ethiopia with chapters that deals with some calculation of the years. As the same time, he said, there is still another book called Abushakir, which came to Ethiopia from Coptic Egyptian of Arab background.

Besides, a piece from the Ethiopian Orthodox Tewahido Church indicates that the calendar of the Ethiopian church came from Egypt and as to methods and dates agree with the calendar of the Coptic Church. But the two calendars differ with regard to the saints’ days and the time of observing them. The year of the Ethiopian calendar contains 365 days to which is added every fourth year an extra day. Each year in this four-year period is dedicated to one of the four Evangelists who come in the following order: Matthew, Mark, Luke and John. The year of Luke is the Ethiopian Leap year and is the year which precedes the western leap year.

Each year is divided into 12 months of 30 days. The extra five days are placed at the end of the year and known as Pagumen. In the leap year the extra day is added to these five days making the Pagumen of this year a period of six days. 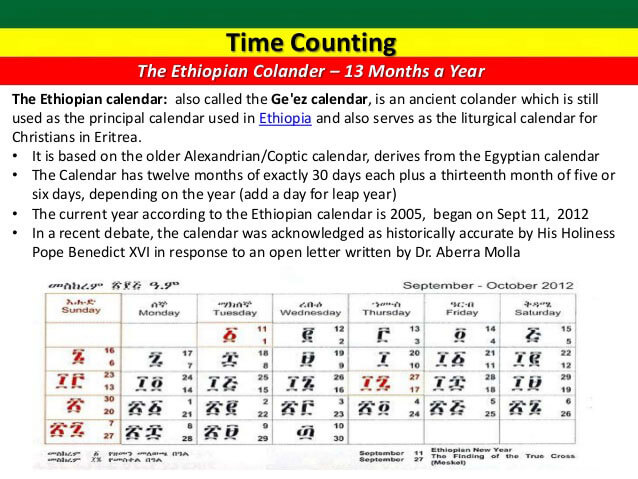 The Church also uses other systems of chronology. There is the Era of the world which dates from 5493 BC, which also differs from the western chronology by seven or eight years. Then there is a system of chronology called “the years of Mercy or Grace,” a system which follows the great lunar cycle.

According to SELAMTA magazine of the Ethiopian, Ethiopia has its own ancient calendar. The Ethiopian Calendar has more in common with the Coptic Egyptian Calendar. The Ethiopic and Coptic calendars have 13 months, 12 of 30 days each and an intercalary month at the end of the year of five or 6 days depending whether the year is a leap year or not. The Ethiopian calendar is much influenced by the Ethiopian Orthodox Tewahedo Church, which follows its ancient calendar rules and beliefs. The year starts on 11 September in the Gregorian Calendar or on the 12th in (Gregorian) Leap Years. The Coptic Leap Year follows the same rules as the Gregorian so that the extra month always has six days in a Gregorian Leap Year.

The Coptic New Year is a holiday in Ethiopia. Christmas falls on the 7th of January as in the Orthodox “old” calendar. Likewise, Epiphany is on the 19th of January. Easter would appear to be calculated according to the Orthodox calendar also. Christmas and Epiphany also do not appear to move by one day during Leap Years as they would if they were being set by the above calendar. Thus, it would seem that Christian feasts are set according to the Orthodox calendar rather than according to the Coptic. An Egyptian Coptic source simply describes the date of Easter as being “the second Sunday after the first full moon in Spring.”

You have Successfully Subscribed!